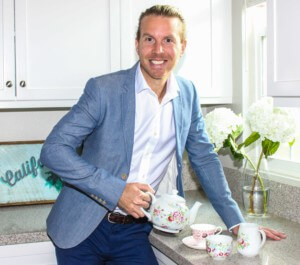 If you’re looking for a Realtor who is just your cup of tea, then you’re looking for James George, founder of The British Real Estate Team. Originally from Salisbury, England. James has a degree in journalism and while attending college, James worked in sales and broke multiple sales records, but radio and sport were his passion. His talent and enthusiasm earned him a position at the biggest radio station in the world, talk SPORT.

Shortly after college, James landed a spot on “Shipwrecked,” the United Kingdom’s answer to “Survivor.” Those four months on a desert island were among the best of his life (his team won, of course). He went on to host various radio and television shows, and while working at a radio station, he met his wife, Kelly. Together, they built My Little Princess Parties, the largest purveyor of custom princess parties on the planet. (Say that five times fast.) Nobody appreciates a sparkling tiara more than James, but after successfully franchising the company and traveling all over the world, he was ready for a new adventure. James found immediate success in real estate and it didn't take long for him to set up The British Real Estate Team.

When James isn't selling houses, you'll either find him on the tennis court, golf course or most likely at Disneyland with his wife and two young children.